here are the results from Hawes on Saturday, control map to follow shortly.

thanks to those who made it out on Saturday, despite the weather! 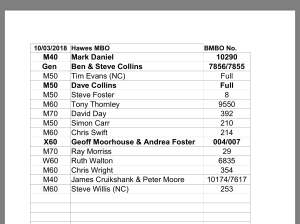 The Start times at Bishop Wilton are from 10.00 until 11.00 with registration opening at 9.30 and we have got 70 pre-entries. Jens has printed 20 spare maps for entries on the day. Hope to see you there!

Please remember that this event is on a Sunday this year and starts at 9.00.

As this is the final event of the year, please stay for the prize giving if you can at 130pm to congratulate the winning riders.

We have got 55 entries so far and if you miss the online deadline you can still enter by email or on the day (it’s a £1 more though). Hope to see you there.
Ps – winter treasure hunt events to be announced soon…

My challenge for this treasure hunt was to reduce the size of the area, find some interesting questions beyond the standard “number on pole” and make it an enjoyable point scoring ride for everyone who came along.

I was a little anxious that the torrential rain on Friday would make it more challenging for riders than I’d hoped. But despite everyone returning in a wet and muddy condition everyone seemed to enjoy it.

Despite attempts to make it straightforward, and remove a couple of the questions that had previously been a problem, there were still a couple of things that could have been better, sorry if they caused you an issue.

#2 – the name of the pump maker at Scackleton caused a few people a problem, although others found it correctly. The description could have been better.

#16 – I incorrectly labelled the question – east of gate, south of forest – although the control marking was in the right place. It should have been north of forest.

#23 – most found this, but adding next to bench could have helped!

#29 – this was a red tag on a tree in Thurtle wood – this was reported as missing by early riders, found on the ground by another rider and put back on the tree! (sorry don’t recall who it was but thanks). So others then found ok.

I tried to mark the soft ground on the map and tell people about the worst bits at the start. Today was always going to be soft going but hopefully there were enough decent bits to make up for that. The worst bit was along Slingsby Bank – especially the bit from #19 going east to the road or south. Unfortunately, quite a few riders got lost by going into Wath Wood (the bit marked out of bounds) rather than following the track along the edge of the wood. Going into Wath Wood quickly becomes a dead end – but given the number of people who did it, probably easier than I thought and one to have pointed out at the start. Hopefully my strategy of making the 30 pointers the properly off-road ones, but the 25 pointers all accessible from lanes was considered reasonable.

It’s a different experience planning a treasure hunt as the spread of controls relies on there being a suitable question, and it can be tough to make them a bit different. Anyone wondering why I relied on the “colour of tape” for #13 will be interested to know that I put that tape the about two and half years ago when planning the Terrington MBO (and we never used that location so it’s never been removed!). So I figured it would be low risk for it to disappear in the last two weeks.

I was really pleased that people seemed to enjoy their ride. I dropped a couple of locations that I felt were just making the course difficult for the sake of it, but tried to provide a good mix of conditions. Nevertheless, I think I expected higher scores, but I think the mud put paid to that.

As a little incentive for those of us never destined to win (like me), I conceived the idea of the “where’s my bike” photo spot prize. Like guessing the number of sweets in a jar, I wanted it to be hard enough not to be obvious but still guessable. I think I may have made it slightly too hard. Comments afterwards suggested it was a good idea and maybe we can do it again for other treasure hunts. Other ideas welcome.

Hope you enjoyed your ride wherever you went!

Finger crossed that the 15th of November will be as sunny and unseasonably warm as the start of November has been, but whatever that the weather has in store I hope you’ll be able to come along to the first Winter Series Treasure Hunt.

The last treasure hunt to start at the Malt Shovel was in February 2013, but I’ve made a few changes. The area is smaller, there are more off-road controls, and I’ve changed some of the clues based on feedback. I’ve ridden all of the off-road tracks, and most are ok but as you’d expect there are patches of soft ground. There will still be plenty of controls that are accessible from the lanes and tracks though if the weather makes riding conditions difficult.

As an added bonus, I’m going to do a spot “where’s by bike” prize… I’ve taken a photograph of my bike  somewhere on the course and the rider who works out where it is (or is closest) will win something too.  So no matter what your treasure hunt score is, there’s still an opportunity to win something!

Maps for both of this weekend’s events are below.

It’s not too late to enter online – just click the link above to be directed to the BMBO site for online entry.

Details for the events are on the detailed fliers in the Events section.

If you’re coming to Wykeham on Monday the event centre is at Hackness Village Hall and it is definitely a good idea to avoid Scarborough on a bank holiday.
Steve will signpost the route through Forge Valley from East Ayton on the A170.
Anybody using the A64 should turn left 1 mile north of the Staxton roundabout and follow the B1261 through Seamer and Irton to East Ayton.
Anybody coming from the north should leave the A171 between Cloughton and Burniston.

Despite a foggy, a rather chilly, start to the morning it was good to see the sun burning through as the morning went on to give us a lovely clear day for the event. 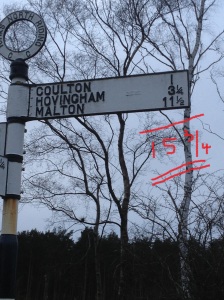 We had a great turnout (which meant Steve printing some extra maps), and everyone seemed to have enjoyed themselves on the ride whatever route they took. Having planned two previous events in the same area, I tried to “winterise” the controls to allow everyone to get a good ride without being bogged down anywhere – and I think I managed to achieve that whilst ensuring a reasonable mix of on and off-road controls. I tried to make the area smaller than before, but with hindsight I would have made it even smaller. The high value controls on Caulkley Bank made that a popular choice for route choice, with some choosing the road over the bridleway (although it was rideable) between 28 and 22.

Planner’s hindsight means there are a few control switches I could  have made but it seemed to work out ok. I tried to avoid the inevitable “number on telegraph pole ” clues, and chose a mix of ‘ride through’ and ‘stop-and-think’ clues. I had a few comments about the maths involved but I like to test everyone’s skill, including reading historic plaques (control 11).

A couple of early returners couldn’t find control 2 so I thought it may have gone missing but later riders seemed to have found it – everyone got points and I’m sorry if it was harder work to find a 5 pointer!

The Malt Shovel is always a welcoming place and we are grateful for their hospitality. It was great to see so many happy, and mostly muddy, riders returning.

Thanks to everyone for taking part – the results are here (updated Sunday 17th 10:24): Hovingham Results (v3)